During the late 1990s, Southcentral Alaska was surveyed for potential commercial-scale wind sites to diversify the region’s power generation resources. 22 potential sites were identified, and Fire Island was selected as the best location based upon:

In 2008, the Federal Aviation Administration (FAA) approved a limited 24-turbine project because the originally proposed 36-turbine project created potential interference problems with the FAA’s VOR (short for VHF Omni-directional Radio Range) aircraft navigational aid that is located on the island. The decision prompted CIRI, at its own expense, to build a new VOR at the Ted Stevens Anchorage International Airport to replace the VOR site on Fire Island.

Regulators granted the project’s key environmental permits in spring 2009. In 2009 and 2010, CIRI started clearing tower sites, conducted an extensive geotechnical survey of the project site and constructed a road network on the island. The Regulatory Commission of Alaska approved a power purchase agreement between Fire Island Wind and Chugach Electric Association on Oct. 10, 2011, clearing the way for major construction to begin. 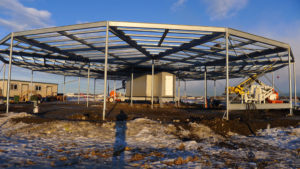 The new VOR at Ted Stevens Anchorage International Airport became operational February 2012. Parts and equipment, shipped from around the world, began arriving in Anchorage in the spring of 2012 for the major construction phase. The project required a sea-life of 75 barge trips to move equipment to Fire Island. Workers also installed a 34.5 kV double circuit submarine transmission line to connect Fire Island to the Anchorage electrical grid. 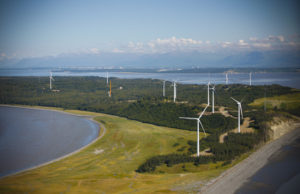 On Sept. 24, 2012, Fire Island Wind began commercial operation. In its first quarter of operation, the project performed better than expected, helping to relieve a critical natural gas shortage during the winter months of 2012-2013.

The project has continued to perform well and has provided approximately 50,000 MW-hours of power annually since 2013. CIRI is encouraged to build on the success of the first 11 turbines and is developing plans to expand the project.